Mediation is an informal dispute settlement process run by a trained third party, called a “qualfied neutral” or “mediator.” The purpose of mediation is to bring two parties together to clear up any misunderstandings, flesh out concerns, and work toward a negotiated resolution to a dispute. Mediation is usually voluntary, although when a lawsuit is pending it is often required by the court which expects parties to at least make one good-fath effort to settle the lawsuit in order to avoid the time and expense of further litigation, as well as the uncertainty of trial.

Bill Hennessey has been a qualified neutral under Rule 114 of the Minnesota Rules of General Practice for over a decade.  Having been a practicing attorney for more than 25 years, Bill has represented his own clients in many mediations, and understands mediation from the parties’ perspective.  Parties and their attorneys expect the mediator to show respect to parties on both sides, to understand of both sides’ versions of the facts and legal issues, to understand the cost of not settling as well as the potential uncertainty of trial.  Bill also appreciates a mediator who, after working diligently to help the parties move toward a negotiated settlement, can recognize when two sides have hit a road block and that further efforts to reach a settlement are not likely to succeed.  Bill believes the vast majority of cases should settle – if the both sides are prepared for mediation (both mentally and from a litigation standpoint).  But sometimes it becomes apparent that a case just isn’t going to settle at mediation, and that trial might be the only way to resolve a key issue in dispute.  Those cases should be the small minority that need to go to trial to get resolved, even though one side (or both sides) might really not like the end result.

Kinds of cases Bill DOES mediate:

Bill is open to serving as mediator in civil law (non-family law) matters including:

Kinds of cases Bill does NOT mediate: 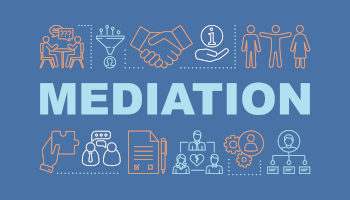